After a very cold night in the Kaibab forest we awoke early to frost. We set off towards Sedona and had a really pleasant drive to Flagstaff where we stopped to phone Rudi & Jackie who we had met near Hoover Dam and had invited us to park in their drive if we decided to visit Sedona, Rudi was in and said for us to come over. But first we wanted to investigate the historic downtown area of Flagstaff which sits on the old “Route 66”. The area was nice and the buildings had the flavour of the old western town but had lost the spirit really as it had become mainly a restaurant and bar area.
The drive to Sedona was along the “Old Creek Road 89a” a really picturesque road winding through the mountain roads and forest. Rudi & Jackie were really hospitable and got us set up behind the house where they had water, electric and dumping facilities which they said for us to use as we wished. What really nice people to be so hospitable to two strangers.

After visiting the Ranger Station we spent two days doing various hikes in the Redrock area around Sedona where our annual pass was accepted for entry, culminating on Thursday afternoon with a visit to the Palatki Pueblo’s which were houses built under an enormous South facing overhanging rock and had been inhabited since prehistoric times by many different cultures. The wall drawings were obviously done in many different eras and the Rangers explained what the Archeology had discovered.

We set off for Jerome, an old mining town perched on the side of a hill. It was a booming town 1876 to 1953 when the mine closed finally becoming America’s largest Ghost town with the population dropping from it’s peak of 15,000 people to just 50. But those few people re-invented the town and it is now a small pleasant town of gift shops, art galleries and restaurants.
On the way to Jerome we stopped at a very large sewing and quilting shop so Judy could explore. There was some beautiful quilting work on show but then Steve found an enormous quilting machine in the back room which could take quilts about 4 meters wide and do all the setting out and intricate quilting stitching we had seen on the walls.
We had lunch in Jerome at the Haunted Hamburger restaurant which one of the Rangers at Palatki had said was a must but warned that the meals were big. The waitress suggested that we have one meal for the two of us which for a dollar extra they would put on two plates with extra fries etc. and for us that was just about right. But she did a good selling job and persuaded us to have one of their “Home Made” eclairs also to share, see picture in the gallery!
Jackie and Rudi had invited us to eat with them that evening and we had a really pleasant meal on the veranda overlooked by the beautiful the backdrop of the Redrock Butes and Messa’s.

We said our goodbyes and headed back to Flagstaff and all the way back to Antelope Canyon which we had missed when we left the Grand Canyon North Rim because we had not marked it on our map. But we were told that the experience would be worth the 275 mile round trip but our route would take us past the Sunset Volcano crater and the Wupatki Pueblo’s this time which we had also missed by using the different route.
The Sunset Crater was a strange experience, the volcano had covered the area with volcanic ash over 900 years ago but there is still only just a smattering of vegetation and a few trees, everything else is just black volcanic rock shale and dust.
The Wupatki Pueblos were very large and would have housed probably over 100 people in their time. It was very interesting trying to understand how they had lived.

After the night spent in a parking area in Tuba City which appeared to be a town of fast food outlets, we continued on to Page to see Antelope Canyon. There are in fact two canyons and as they are in the Navajo Tribal Park are owned and operated separately by the Navajo people. There was no Visitor Center as we had become accustomed to in the National parks where we could look around and find out what was available, just a pay booth. After quite a long wait while the lady in the booth was apparently explaining everything to each of the cars in front she went through the whole thing with us explaining that there was a $6 per person fee for entering the park then their tour which was $25 per person or the other tour over the road to a different canyon which was $20 each but only the one park fee. We asked which tour was best and she said with the light as it was the other tour would be best so we went there. 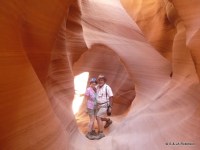 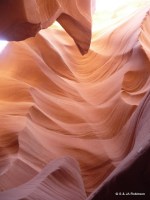 Our Navajo guide Buddy explained that the two canyons were different this one was “V” shaped the other “A” shaped. So quite dark but with eerie light beams entering the canyon but he thought the one we were in was best for photography with an ordinary camera.
The experience was amazing with the canyon floor in places being only three inches wide and the most incredible shapes and colours. We will put some of the 100’s of photo’s we took into our on-line gallery.
After the tour we asked Buddy our guide where else we should visit and he very kindly marked the good view points we should visit on a map, firstly to see the Glen Canyon Dam and lake Powell from a couple of overlooks then visit the dam itself then an amazing overlook from cliffs to Horshoe bend a 270 degree ox-bow bend in the Colorado River, he suggested we visit it at sunset but it was very cloudy and we decided that there wouldn’t be much of a sunset tonight, so dinner would be better so we drove back a bit to town and spent a very good night in Wal*Mart’s parking lot along with about thirty other RV’s
Steve has somehow stretched one of his Achilles tendons and is limping about in pain so tomorrow will have to be just a lazy day by the lake while he rests it so we can hopefully continue with our hikes.
Till next time……