We left Najac finally after a hurried packing spree trying to think what we needed after the unavoidable delay as a result of the sad death of Steve’s  brother Fred. We intended to leave Sunday evening but managed Monday lunch time instead. We had a schedule to meet as we were booked into the Peterborough Motorhome Show and we wanted to drive the “Highland 500” more of that later then we were booked into a number of events at the Speyside Whisky Festival, more of that later also.

The trip was good trying the western route via Clement Ferand and left of Paris. We have been going via Paris for years but in recent years have had very bad traffic jams even in the middle of the night. We decided to park for the night before the ferry, at City Europe as the ferry car park was probably going to be a no-go area with the new security and the reality was what we had expected, with massive fences from a few miles out of the  docks. We had a quiet night after a bit of shopping at City Europe and parked with a few other motorhomes. We filled up with diesel and emptied our waste tank at the ultra-modern self service fuel station there, before heading for the ferry.

Steve had arranged to pickup some specialist kit for the Motorhome satellite system at Johns Cross so we arrived at our son’s house near Eastbourne at midday and got a great welcome from two really excited granddaughters then had a few great days with Kerry & Cheryl’s and the girls. Steve also managed to get the satellite internet working with the new control box.

We then headed along the coast to stay with Steve’s cousin and  meet up with a few old friends before turning northwards towards Peterborough and the annual Motorhome Show. We spent he night before the show with more friends who had moved from Kent to near Peterborough then headed for the show,

The weekend was very wet and very, very muddy but all the traders we talked to had a good weekend trade and we had a great time wandering around and buying “stuff” and meeting with fellow motor homers. A strange pastime only understandable to the initiated.

After filling up and emptying down we left the show ground at about 11am and managed to get off the wet grass without being towed which was a bonus and had a really great run doing 608 km to arrive at Loch Lomond at 20:40 and parked up beside the Loch for supper and a catch-up with emails and this blog. The new bits for the satellite system have worked well and we now have satellite TV and simultaneous satellite internet wherever we are, so no more searching for a rare open WiFi or using a different mobile sim  for each country. Expensive but the OldAgeTravellers are now spending their kids inheritance. Recent events have showed us just how fragile life at our age now is.

Tomorrow we head for Inverness to start the Highland 500 which is a 500 mile route round the far north west of Scotland reputed to be one of the top 10 drives in the world. We have done the Pacific Highway and the bear Tooth Pass in the USA and were very underwhelmed but are expecting much more of Scotland. 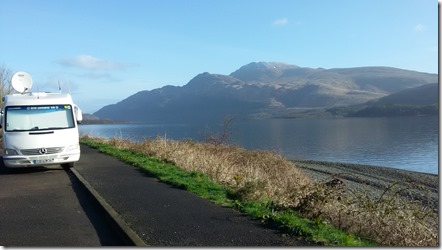 We left Loch Lomond towards Inverness, passing through Fort William and made a stop at the 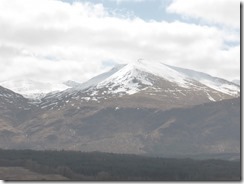 Memorial to the British Commandos who trained for their WW2 missions in sight of Ben Nevis.

Travelling along the northern shore of Loch Ness with its deep dark waters we finally arrived at Inverness where we attempted to find some LPG to top up so as to ensure we had heating during our trip. But the places in our database were no longer there so we headed north towards Wick to another place in the database but they were waiting for a new pump to be installed. On to the next place en-route and success, we managed to fill up so we should be OK for another ten days.

As we headed on the snow capped mountains ahead of us suggested that we may be needing the heating. We continued driving for about an hour till we found a good spot to stop for the night, just off the 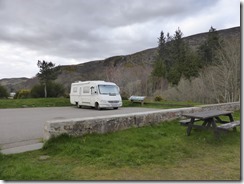 A9 beside Loch Fleet.

For those that haven’t followed our escapades before, we travel with a computer on the dash, running a live map controlled by a GPS receiver and tracking our every movement on the map. The map also has thousands of “Points of interest” POI’s which show on the map as we travel. Some of which are Wild Camping Spots so with only a very minor detour we  can find a pleasant place to stop. We also have poi collections for Supermarket Fuel Stations, Weatherspoon’s restaurants, Public water taps and Toilets and many many more which we are` adding to all the time. This map also has a very accurate speedo which can show KPH or MPH in Judy’s view so she can remind Steve if he strays over the top.