photo of Dunrobin Castle on the way. The iconic John O’ Groats had been transformed since the last time we visited about 5 years ago when it was a dreary run-down place. The council had erected a signpost for photographs, and the run down hotel had been transformed. Unfortunately the lady at the Tourist Information knew nothing about the HL500 and had no maps and unfortunately we find out later, failed to point out the nearby sea stacks which we should have visited.

to Dunnet Head which is the most northerly point of mainland Britain where we hoped to get a good sunset and possibly a sight of the Northern Lights, although the cloud cover didn’t bode well for either.

We did a bit of bird watching, laughing at the pour things trying to land on their nests but being lifted by the up draught at the cliff face. It was bitterly cold with total cloud cover but the UV is really high as you can see from my photochromic glasses which are completely black.
Only 48km travelled today.    N58.67062, W4.67684

A really nice night by the lighthouse at Dunnet Head with the wind rocking us to sleep, we didn’t stay up till 2am just in case the Northern Lights decided to appear so a holiday in Iceland is probably on the cards, don’t think we can drive though!

We drove along the coast road to Thurso and looked for the Tourist Information where we watched a very interesting film about the Western Highlands and learned about the hand cut flag stones which were marking out the boundaries of many of the fields.

After Thurso the scenery started to change and become more dramatic and long sweeping beaches and azure blue seas started to appear which could have easily been round the Mediterranean except for the temperature!

A few miles later after we passed Doonray power station we turned off towards Strathy point parked and  had a nice walk for a few miles to the lighthouse and back, bracing I think is the polite description. It’s alright for the Scots who seem to live in shirt sleeves in all weathers, but when you live in the South of France, Bracing weather takes a little getting used to. but at least the sun is shining most of the time. 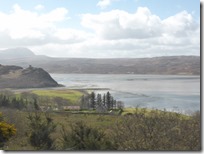 As we passed from Caithness into Sutherland the buildings were fewer and the countryside changed slightly to more rolling hills but with a backdrop of mountains. Beautiful views of Loch all the way, before our stop for the night just before the Smoo Caves which we will walk to  tomorrow. 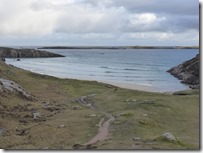 Our parking for the night is beside a small but stunning bay with a clean golden sandy beach. Not swimming weather for us though!