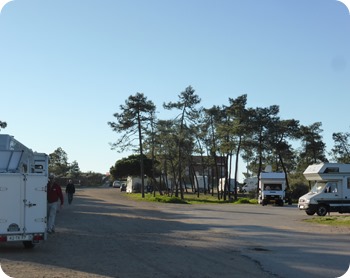 After three nights on our nice beach,
Prai do Cabeco and a couple of walks into the small town of Monte Gordo, we had been wild camping for five days so needed to empty our waste and fill with water and Auto Gas for the heating and cooking, we had been using quite  lot as it was cold morning and evening. So we moved just eight km west to an Aire de Camping Car or Aire de Service as they call them in Portugal.

Wild Camping at Prai do Cabeco

At this point we should give credit to a couple who write a Blog called “OurBumble.com” who have published their database of the nice places to stop and Wild Camping Spots they have found on their travels all round Europe. Steve managed to import them all into our Autoroute map so it is very easy to hop from place to place as they have included all the GPS coordinates and a description.

16th January 2017 Manta Rota Aire
Manta Rota Aire was quite large with about 100 motorhomes of all sizes and very few free spaces. Steve was about to reverse into the first space we came across, when a German motorhome 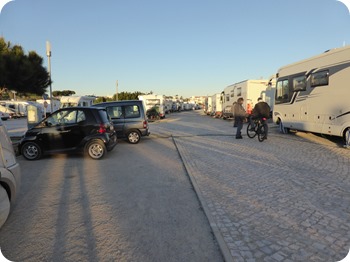 pulled right up behind us then refused point blank to reverse back just a little when Judy went to ask, she then thought world war three was about to start when Steve stormed back to “have a word”. But it was obvious that the few brain cells the poor fellow had between his ears were struggling enough and to expect a reversing manoeuvre would probably cause total failure. So Steve just drove on to another space which somebody had just luckily driven out of, which as it turned out was a better spot.
Apart from being crowded the aire was quite good, €4.50 a night which included dumping and water and free Wi-Fi, very slow because so many were using it but adequate for emails. Electric was available for €2.50 for eight hours which we had a couple of nights to boost the batteries and reduce the gas usage for heating and fridge.
The little village of Manta Rota seemed to be mainly empty holiday homes but it had a couple of restaurants a Pharmacy, hardware shop and a good supermarket which sold us an excellent 5lt box of red wine for €6.
While walking round Steve spotted that a GB van had the same DIY satellite internet setup as us so went to chat to the the guy who turned out to be Sean who Steve had been chatting to on the MotorhomeFun forum. He was actually  a professional Satellite  TV installer and gave Steve a few tips on how to set the dish up a bit quicker as we move from place to place. Portugal is right on the edge of the Satellite footprint so spot-on alignment is essential.
Wdnesday morning we felt three days was enough in what seemed to be a village of motorhomes so we packed up quickly and got ready to leave. This is the first air we have been on with an automatic barrier and charging system so as there was a queue at the dumping and water point Steve went and paid as we would usually do then filled up before arriving at the exit barrier which refused to open with our validated ticket. It seems that with the automatic system 24hours means 24 hours so we had to pay for another day just to get out through the barrier. Lesson learned and only €4,50 luckily. 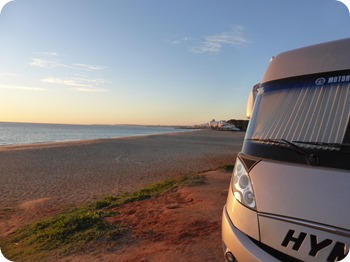 Again from the Bumbles list we chose a beach near Quarteira which is the buildings you can see along the beach in the picture to the right.
We walked into Quarteira a couple of times, which has a really nice promenade, very clean and a fish market at the end about 2.5 km. We bought a large Sea Bass about half a kilo for €6 (great price) which the nice man said he would fillet  for us. Well at the end there were two tiny fillets about 100 gram each which upset Judy a bit as she could have done it much better, but then we would have all the scraps to get rid of and the smell in the van. However after Judy had cooked them they were fantastic Very much to be repeated.
On our walk back we saw a restaurant advertising an English Sunday lunch so on Sunday decided that would be very nice, so took a leisurely stroll along the prom. As we arrived nearly to the restaurant an American couple stopped us as they heard us speaking English and asked where the Sausage Festival was which we didn’t know. But we got chatting and it turned out that they were full timing in a caravan in the USA but spent about six months a year in Europe. But their caravan was a 35ft Airstream which is a very iconic retro US design and with the truck they towed it with it totalled 52 feet which is nearly 16 metres! Not for the narrow tracks of Europe. They were heading for the same restaurant so we had lunch with them and all got on famously. The Roast dinner of Roast beef or chicken with Yorkshire pudding and all the vegetables that we had was excellent. Their names were Lance & Trish Harris, they had rented an apartment in Albufeira for three months and were just out for the day but we exchanged emails as they were planning on a holiday on the Midi Canal in France in July just a few miles from our house so we said we would try to meet up when they were there.

When we got back to the van this little chap was pecking around for worms just outside the van, We think it is a Hooper like the ones we see in France. But they are not usually as fearless as this one, he was completely unconcerned about how close we were to him.

Monday 23rd January 2017 Praia de Arrifes near Albufeira.
We had been on this beach for four days so it was getting time to empty again, while out walking we had seen a very large Aire de Camping Car about a mile away so packed up and drove there to see if they would let us dump. No problem the lady said and opened the gate for us, no auto barrier this time. We emptied our waste but some French vans were messing about trying to fill all their tanks up with water as the it was metered, just €2 for 100 litres! We still had half a tank of water and couldn’t really be bothered to wait for the French to finish so gave up and left with a thank-you to the lady at the gate.
Steve had looked up another of Bumbles great places near Albufeira so we 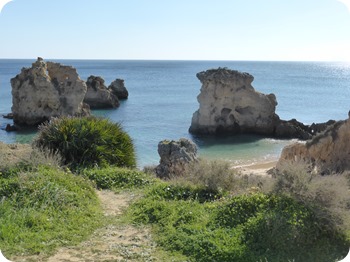 drove there just 31 km this time and again a really nice place,next to a very secluded beach with a beach bar which was closed for the winter. This part of the coast was very different to the miles of sand we had been used to. Steep sandstone cliffs worn into fantastic shapes by the sea. If you look carefully to the big rock in the sea in the picture here you can see a hole right through. There were many like this. it was fascinating looking at the shapes when we walked along the top of the cliffs.
We emailed Lance & Trish to say we had moved round near Albuferia and they replied suggesting we meet for dinner that evening and they could pick us up as they had a car. We had a very nice meal and all just. seemed to click so it will be good to meet up again in July. When they dropped us back at our van they were very impressed and I think a little surprised at the quality of our European Motorhome. Meeting them has started us wondering whether we should do another tour of the USA, but ship our motorhome there this time which would make it far more fun than with the badly designed hire one we had before.
On Tuesday we got our bikes out and rode into Albufeira. a little apprehensive of our return journey as we descended  a very steep hill at the start. Yes a scooter will certainly make our exploring much easier. The old part of Albuferia apart from being very hilly  was a maze of little alleyways looking very much like some of the hill towns in Morocco but from the number of bars & nightclubs a very noisy place in the season.
The forecast is for rain tomorrow Thursday so we will leave early as the road out is a bit steep and could become muddy which would not be good for a 4 ton front wheel drive motorhome. Fred & Chris have sent a text to say they are about twenty miles to the west on their way back so we will try to meet up to hear about the places they have found.