After a hectic few weeks which included fitting loads of goodies to the new Motorhome; “Jemima” the Hymer, sadly selling our old leVoyageur which will be very much missed and sorting the house out we got away early on Friday 29th September.

The ferry was booked for the 05h30 crossing on Sunday the 1st October, this time from  Dieppe to Newhaven as we were going to Kerry’s house in East Dean near Eastbourne first. The crossing costs a bit more because it is four hours but that is probably paid for by the 200 miles driving saved up to Calais then from Dover to Eastbourne.

We had a nice quiet night and left at 07h45 on Saturday morning so as to get a few miles in before the Saturday shoppers came out. Although with only 300km to go we had no need to rush but this next stretch was mainly on smaller N-roads via Orléans, Évreux, Rouen to Dieppe so we arrived at the Dieppe ferry port at about 17h00. DFDS wanted double the price for the earlier ferry so there was no point as we would not land till about 23h00 a bit late to arrive in the UK. 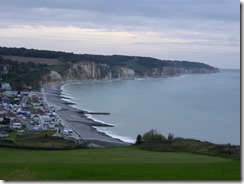 Especially as we had arranged to meet another member of our motorhome club “Motorhome Fun”, near Newhaven  on Sunday morning, as we were buying a spare cassette for our on-board toilet from him. We saw on our map a good parking spot a few miles outside Dieppe  so we headed there via a massive Auchan super store where we filled up with fuel and LPG. The parking spot had a lovely view over the small seaside village of Pourville-sur-Mer which looks a nice spot and perhaps worth a visit another time we come this way.

As our sailing time was 5h30 in the morning, we had to check-in by 4h30 so we set our alarms for 3h30 and luckily woke up ok and were on our way by 3h45 and at the ferry by 4h15. Check-in and loading was straightforward with a bit of a security check in the toilet/shower room and the very large rear locker. The ferry was very nice, absolutely spotless with beautiful highly polished wooden floors and nice large reclining seats which were very welcome for the four hour crossing. There was also free Wi-Fi which helped us catch up on emails before settling down to sleep through the crossing. The Motorhomes had been loaded at the front so  we were soon unloaded and through security. Being just a small freight port the facilities were not as swish as Dover just an old  long shed to drive through and answer a few questions from the policeman then away. Lenny had texted as to where we should meet him just a few miles west at Saltdean so after a quick chat and exchange of money and goods we arrived at Kerry & Cheryl’s house in time for a late breakfast of Croissant’s we had brought with us and a very welcome cup of coffee.