Well the wind blew all night and the rain came down by the bucket full but we were quite warm and snug all night. With the rain still hammering down we left the farm shop at 8h30 long before it opened but were grateful for the night’s stop.

We were heading towards Edinburgh to hopefully to meet up with an art friend of Judy who moved back from France to the UK some time ago. We had emailed her but had no telephone number as she had moved, so decided to just knock on her door, unfortunately she was not in so we spent the rest of the morning stocking up on food for the week in Asda which was nearby.

After shopping then lunch, we headed for the The Helix Park which contains the magnificent stainless steel sculptures by the Glaswegian artist Andy Scott. Called the Kelpies, after the mythical Scottish beasts which usually took the form of a horse to fool unwary travellers. Andy however soon moved from the mythical, towards the beautiful Clydesdale heavy horses that used to pull the barges on the canals which flow between the Kelpies.

When it got dark we walked to the Kelpies again, they were now lit internally gradually changing colour  from gold to red, blue green and back  to gold absolutely beautiful.

We had checked with the visitors centre that it was ok to park for the night so after the magical view of the Kelpies at night we settled down in our nice and snug motorhome.

Nik and family arrived about lunch time on Saturday so we headed with them to the fantastic play park at the other end of the Helix Park. The play park was truly amazing with the highest tunnel slide  we had seen other than at a swimming pool. These were stainless steel and Steve was really wondering if he could have a go! Apart from  the slides there were all sorts of other equipment that we had never seen. Finlay and Lewis had a fantastic couple of hours and we really enjoyed it as well.

Nik had seen on-line that there was a Geocache nearby. These  are little boxes of hidden treasure literally all around the world which you locate by GPS coordinates. Not real treasure just Christmas Cracker junk toys. you take something and leave something else and log your visit in the box and on-line. It is a really good way to see and explore the countryside and the boys really enjoy the search for the treasure.
Having discovered the “treasure” we walked again to the Kelpies with the boys then after tea another walk to see them lit up in the dark. We all had a good night and being the weekend a few other motorhomes joined us in the car park.
Next morning after another go on the play-park we drove the few miles to the Falkirk Wheel which is an amazing structure that lifts or lowers large canal boats 24mt. (79 ft) from the Clyde Canal to the Forth & Union Canal.

This is the only one of its kind in the world and literally only uses the power for boiling a kettle to move this gigantic structure with its cargo of two large boats floating in large tanks full of water. Without this structure, a long flight of locks would have had to be built which would take a lot of space and time for the boats. 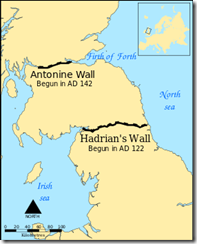 After parking the campers we donned our walking gear for a walk to the Antonine Wall, which was a defensive barrier built by the Romans many miles north of the better known Hadrian’s wall.
On our walk we also searched for some more Geo-Caches which turned out to be very cleverly hidden and very difficult to find. One was behind a rotating surface on the side of a fence post and another in a small sample tube embedded in a hole in the fork of a tree. Judy turned out to be very good at finding these. But again great fun looking for them.
After a walk through a long canal tunnel we arrived back at the Falkirk Wheel complex for an hour or so letting the boys lose on the play park. Much to their displeasure and our relief the water play area had been emptied for the winter or else we would have had some very wet clothes to look after during the rest of our trip.

From the Falkirk wheel we headed off towards Blair Drummond Safari Park.

Sorry this is a bit late being posted but the days are very full with the boys.