We left the Falkirk Wheel on Sunday the 15th afternoon, for the half hour drive to the Blair Drummond Camp site. We don’t often use camp sites but with Nik, Annie & the boys in a small camper it would make it much easier for them especially as the weather was threatening rain and the tail end of the Hurricane Ophelia could possibly reach as far as the centre of Scotland where we were. The part of the camp site where we found two adjacent pitches` was inside high brick walls so would hopefully offer some protection if high winds did come.
The storm didn’t hit overnight after all and we all had a good night. Next morning we bought tickets to the adjacent Safari

Park which, as we were staying in the camp site would last for the duration of our stay rather than just one day and we were able to just walk into the back gate of the Safari Park. Another bonus was that as we 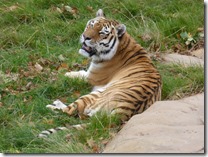 were on foot, they drove us through the wild animal enclosures in a safari bus and we got a great view of the animals and a commentary from the driver. 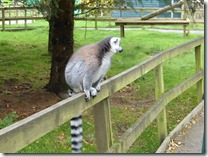 Much .better than worrying if a monkey was dismantling the Satellite dish on the roof of the motorhome! We had a

great two days, all the animals were in great condition and seemed really happy which was good to see, the day finished with a really funny display by a Sea Lion called Lela.
As well as all the animal exhibits there were many other activities for the kids most of which were included in the admission price. the big fiberglass slide was a particular winner even tempting Steve (Gramps) to grab a sack climb the steps and have a go.

We arrived back at the vans quite tired after a good day. That night the storm did hit  and it was a very noisy and windy night. The next morning while servicing the vans before leaving the site we could see dustbin lids scattered all around and when checking out the manager told us that some of the long term caravans outside the wall had sustained damage. So we were lucky to be inside.

From Blair Drummond  Safari Park we headed to Pitlochry, the town was very busy 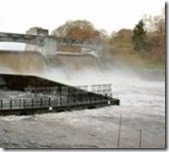 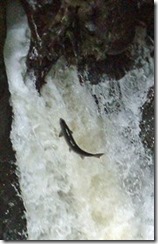 as they had an enchanted forest event on but we found a nice level car park a little outside the town near to the Hydro Electric dam.and just had time to walk to the dam and see the enormous flow of water over the dam and through the turbines after the recent rains. There is also a very interesting Salmon ladder, 34 connected tanks allow the salmon to gradually swim past the  massive obstruction of the dam to their spawning grounds higher up the river.  After a good night we walked the short distance to the town to visit the mountain clothing store to buy some special warm clothing for our impending trip to Norway, none of which are necessary or available of course in the South of France. We then spent the morning in the visitor centre for the dam which had a number of very interesting exhibits which the boys found very interesting. There was also a Geo Cache in the centre which they enjoyed finding.

Our next destination was Braemar which meant a spectacular drive across the mountains through the ski resort. On the way Nik suddenly stopped for no reason 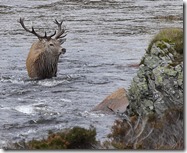 and ran back to ask for Judy’s camera. He had spotted a magnificent Stag, standing in the river just beside the road.
In Braemar the local knitting club had an annual fund-raising event. They knitted characters that were set up around the town as a treasure hunt for the children, the characters were then auctioned off at the end for charity. This year the theme was Troll’s and we all had

them all. The quality of the knitting was amazing.

We parked for the night with four other motorhomes in the town parking and had another Troll hunt in the morning.Most Scottish towns seem fairly relaxed about motorhomes parking whish is great and allows us to visit explore and spend a bit of money if we can. After the morning Troll hunt Nik & Annie headed for home while we visited some charity shops to find some more cold weather gear for our Norway trip and found some real bargains before heading to Nik & Annie’s house a little north of Aberdeen.

So till next time……