Our alarm was set for 6am but we were awake at 5h30 so started to get ready.  Judy had done a fantastic job of thinking through all the different permutations of clothes and other things we would need and they were all in Kerry & Cheryl,s utility room.

The cab arrived at 6h45, 15 minutes early and suddenly chaos erupted. Kerry & Cheryl had business meetings so Kerry was just driving to the station, Cheryl was getting the girls in the car to be delivered to a friends for breakfast and we were getting our cases etc. into the cab. Within ten minutes however, peace resumed and we could quietly lock the house and Motorhome up and settle into the cab for the journey to Gatwick.

Gatwick was painless except that for some reason Judy tripped the metal alarm in security and had to stand in the full body scanner and then be checked all over with a hand scanner. After security there was time for a “Gold Plated” breakfast at Wetherspoons (just to get us used to the Norwegian prices), then walk to the plane. We were flying by Norwegian Airlines which was a bit more relaxed that Ryan Air and even had free Wi-Fi during the flight.

At Bergen airport our cases were just going round the belt when we got to it but by the time we got outside the transfer coach had just left but no real problem, there was one every hour. At the Hurtigruten terminal we were issued our cabin number then a safety briefing and introduction to a rather comprehensive life jacket but not comprehensive enough to survive the sea above the Arctic Circle me thinks. 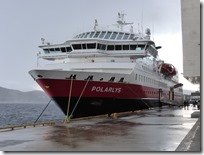 Our ship for the trip was the Polarlys, which looked pretty big to us but when they showed us later with it parked next to a usual cruise ship it was tiny in comparison. 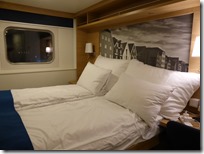 The cabins were ready by 17h30 and very comfortable ours looked. We had opted for the Superior cabin which had a double bed and large window rather than single bunks and a small round porthole. It was also on the 6th deck without a walkway outside so we would have an unobstructed view. But another passenger we were chatting with said it rolls much more on the top deck! Oh well, we will see. The next morning we were chatting with them again and they had a bad night from all the banging they could here which we didn’t so perhaps the top is best lets hope we can soon find our sea legs. The ship sailed at 22h30 with many people on the rear deck watching the lights of Bergen slowly disappear. (don’t forget clicking a picture makes it larger)

Day 1 finished with a spectacular buffet meal then a welcome meeting and a bit of exploring of the ship before settling down for the night.

The ship sails through the night and docked at Florø at 04h30, Måløy at 07h00, Torvik at 10h30. Each of these stops were only for 30 to 45 minutes each just to deliver or pick up a bit of freight or the odd passenger. The ship is actually the mail boat and local ferry but also takes cruise passengers like us.

After a good night, for Steve anyway, Judy woke a few times, probably not used to the very low throb of the engines or maybe the rocking, we headed for breakfast. Just as we were leaving our cabin they announced that we were just about to enter the open sea and to be prepared for some rocking. Well as if they had pulled a switch, the deck started leaning quite significantly. Breakfast became quite entertaining with everybody staggering around like drunks on a Saturday night out. Carrying a cup of coffee was interesting, and needed extreme concentration. Steve did the coffee and found that it was best to wait until the destination was uphill and walk quickly so as to arrive and hold on to something before the floor went the other way. Amazingly we only heard one plate hit the floor. The stewards were great though and could walk holding quite a few plates without the drunk act. We decided though that for us, carrying more than one thing at a time was a step too far. Perhaps by the end of the voyage, we will get used to it. Although we are told that we only go into the open sea a few times, the rest of the time we are in fjords or between the islands and the ship is very stable, we will see.

At 12h00 we arrived at Ålesund where we had three hours to spend on shore if we wished. The tours arranged by the Expedition Team on board were very expensive, a two hour hike to the top of a view point for example was £50 each person and that was the cheapest, some were over £200. We had seen a “Noddy Train” tour, around the town advertised and to the top of the same mountain for a much more reasonable price but it left from the Cruise Terminal which was about a twenty minute walk from the Hurtigruten terminal so we had a walk to get a feel for the town and find the train. When we got there however there was no train to be seen so perhaps only a summer thing. Never mind it was a nice walk and we found a supermarket on the way back to buy a few drinks for our cabin. We had heard about Norwegian prices, but £50 and upwards for an ordinary bottle of wine on the ship seemed a bit too steep! In the supermarket we found that bottles were about £12 each and a 3 litre bag-in-box for about £40 so equivalent to about £10 a bottle so the mark-up was about normal for a “Hotel” type of establishment. At home in France we buy our wine for just £1 a litre.
Apart from alcohol everything else we saw was also very expensive except for clothes and fuel which seemed to be about the same price. But it does make one wonder if wages are as high to compensate.

Back on the ship the next port was Molde for just 45 minutes then a long journey to Kristiansund where we would arrive at 22h15. 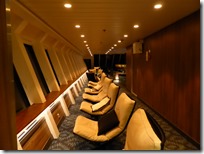 The whole of the top deck of the ship was lounge areas with the front being a massive panoramic viewing area with large leather lounging chairs where we sat for the whole afternoon watching the rugged coastline with little clusters of houses. Very much like 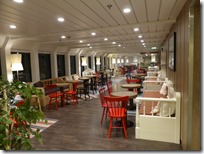 the highlands of Scotland which we had enjoyed from the road when driving the Highland 500 in our motorhome. The middle part was an ice cream parlour and` coffee lounge then the rear was an open viewing area where 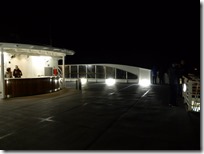 hopefully we will eventually be able to see the Northern lights.
We had been issued with a time of 18h00 for our evening meal which was a bit early so changed it to 20h00 or it would be a long evening as it was dark by 19h00 and would get darker earlier as the cruise went further north. As we were leaving our cabin to go to dinner they again announced that we would be entering the open sea for about two hours. At least we would be served our evening meal rather than carrying it ourselves like at breakfast. Never having been on a ship for more than the English Channel trip both of us were not sure how we would feel and to be honest had been a bit concerned about it, but apart from not being able to walk straight so far it had not been too bad. Unlike an Australian guy we had been chatting to who suddenly started to turn green and headed for his cabin to lie down. His wife however had no trouble and chatted with us for the rest of the evening.

After dinner there was a film explaining the Northern Lights, which was our main reason for the trip. The film was very interesting with some stunning photography. We both really hope that they are well behaved and appear for us.

After the film we spent some time chatting with a few fellow passengers before heading for our cabin.

We had a good night and today is our 44th wedding anniversary, the ship left Kristiansund at 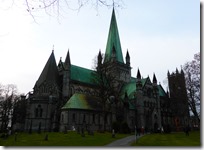 23h00 last night and arrived at Trondheim at 06h00 this morning. We had a slow start though and by the time we had breakfast we left the ship at about 09h30. for a walk to the Trondheim cathedral. It was a very modern town but the old part was very much like parts of the USA 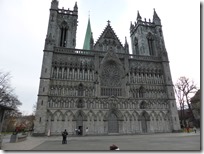 or Canada with wooden clad buildings. There was an entrance fee of £18 each for non registered pilgrims and by the time we had looked round the outside probably didn’t have time to properly see the inside, so had a stroll back looking in the shops. In places the pavement was very icy and we almost went over a couple of times.
From Trondheim there was quite a time before our next stop so we had a very pleasant afternoon watching the ever wilder scenery. 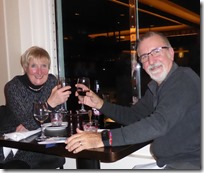 As it was our anniversary, although not a requirement on this voyage we scrubbed up a bit for dinner and splashed out on a bottle of wine. It was a beautiful meal very nicely served then as we received our sweet all the restaurant staff came to our table waving Norwegian flags and singing what must have been their equivalent of “Congratulations”. I think thanks must go to Lisa our Travel Agent, but I don’t remember mentioning it to her. At 20h45 while we were having dinner the ship docked at Rørvik just for half an hour. We finished the day off just chatting with some of the English & two Australian people we had palled up with during the cruise.

Another good day but tomorrow we must be up early as we are due to cross the Arctic Circle at around 07h00.