During the night the ship docked at Brønnøysund at 00h45, Sandnessjøen at 03h45, then Nesna at 05h25 we both woke probably at the sound of the engines to see really heavy snow falling outside the window then dozed for a bit as we were due to cross the Arctic circle just after 07h00 and needed to be dressed up in our coats to be on deck. We actually crossed the line at 17 minutes past 7, but it was so dark the view of the marker was not good. At 09h15 the ship docked at Ørnes  for just 15 minutes. To see this 80 meter ship dock itself, load goods and cars and sail again in just 15 minutes is amazing. 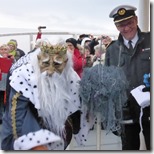 At 10h30 we were summoned to the rear deck again, for The Arctic Circle Ceremony when King Neptune greets and anoints new visitors to his Arctic Kingdom helped by the Captain of the ship that brought them there. Basically the captain and King Neptune would pour a ladle full of iced 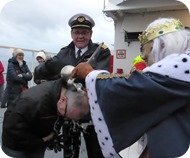 water and ice down the neck of each passenger in turn. Steve thought he had timed it just right as the bowl of water was empty with just ice in it, but as he bowed to Neptune a large bucket of iced water was added to the ice and the Captain put a full ladle down his back closely followed by Neptune with another full ladle. Judy took some photos then ran to avoid the same fate. Drying off after, Steve even found ice in his boxers!

We had a quick lunch along with most of the other passengers as we were docking in Bodø at 12h30 for three and a half hours for a bit of sightseeing. The town was covered in snow so quite a bit of care was needed while walking, to avoid slipping. From here north it looks as if we will need the spiked attachments for our boots we had bought and our poles, for a bit more support.  Walking around the town we were amazed at the care of drivers, slowing and stopping for pedestrians before they even arrived at a crossing. The cars must have spiked tyres because the roads were so slippery, we actually noticed that some of the bicycles also had spiked tyres.

We sailed again at 15h00 with the sun going down then docked at Stamsund at 19h00 then again at Svolvær at 21h00. Just before 23h00 it was announced that we would shortly be entering the Troll Fjord and to be on the front deck. This fjord is just 200 meters wide at it’s entrance quickly reducing to 100 meters with almost sheer sides. In the summer the ship would actually go into this fjord, turn at the end where it widens then sail out again, but it is forbidden in the winter for fear of avalanche. But the captain did enter the first part lighting up the sheer rock faces ahead with two powerful search lights. Unfortunately the pictures are too dark to publish here.

After another hour or so chatting our cabin called, a really good fun day today, but this lazy life is so tiring….

During the night the ship docked at Stockmarknes at 01h00, Sortland at 02h45, Risøyhamn at 04h15 then we woke with the sound of the engines at 06h45 as we arrived at Harstad for an hour. we didn’t leave the ship but had breakfast so we could sit and watch the scenery. The expedition leader gave a very good talk about the early trappers and hunters and even one man who still lives that lonely lifestyle then the ship docked again at Finnsnes at 11h00 just for half an hour. Next stop was Tromsø at 14h15 where Suzanne & Adam the nice Australian couple were to be leaving us, she in fact was English but had a good Australian accent. So a quick lunch then donned a lot of cold weather clothing. After our experience at Bodø in the snow we also took our walking poles with us. There obviously had been snow but being a fairly large university town they had it all cleared but it was cold and already by 15h00 it was completely dark so we returned to the ship at about 17h00 where we chatted to  an English couple who had joined the ship just for one stop so they could join a sailing boat at Skjervøy our next stop on which they were going Wale & Northern Lights watching. 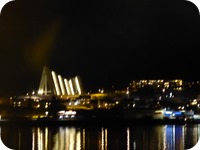 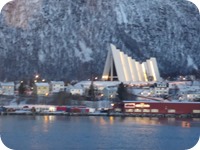 Judy got a great photo of the very modern Cathedral as we arrived in the light then another as we left in the dark. Sightseeing in the cold and dark is difficult but we are determined to come back in the summer in the motorhome when it will be very much easier.
With the boarding door open the observation deck had become very cold so we went to our cabin to warm up but over the speakers they announced that there was a little bit of northern lights outside so quickly on with our coats to be met at the stairs by a lady saying “Nothing to See”, a bit disappointing then Steve realised that she was coming from the back of the ship but north was to the front. So we pushed on to the open deck and headed for the bow to be rewarded with a bright green glow ahead which unfortunately turned out to be the Starboard navigation light reflection!  At the Bow when our eyes has got used to the very dark night, sure enough there was a very faint green glow like a plume of smoke which gradually got bigger then faded to the slightest hint. By this time we were both frozen as in our haste we had forgotten to don our over-trousers and scarves. Back in the cabin we carefully laid all our clothes out so as not to forget anything next time. In preparation for dinner at eight We had showers then as Steve was just getting out the speaker went again saying that the lights were back, So this time everything on then sprint to the bow on deck 5 open walkway. This time there was a much bigger light in the sky, not dancing and swaying like the film had showed us but a definite improvement on last time.
At 22h30 we docked at Skjervøy. After dinner, we sat in our cabin ready to run if the speaker went again. But the lights were not cooperating for us. But in the hope that the intercom would wake us up if there was anything to see, we finally went to sleep.    Perhaps tomorrow…. 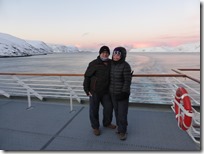 No northern lights during the night unfortunately. But we had docked at Øksfjord at 02h00, Hammerfest at 05h15 then Havøysund at 09h00. Passing through a narrow channel the speaker told us that on the other side of the Island was Nord Cap the most northerly point in Europe. We arrived at 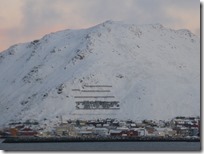 Honningsvåg at 11h15 which was on the mainland side of the island. This would be a long three and a half hour stop to allow time for an excursion to Nord Cap, this is another sight we will see better when we return with the motorhome. The ships crew used the time to lower one of the life boats for checking and have a full scale emergency drill. We donned all our gear again and had a nice walk round the sleepy little town. It was fascinating to see local people walking with little pushchair-like sledges using them as a sort of zimmer frame to avoid falling on the ice. The main street was on a hill and as we were walking up an old lady was zooming down on the other side standing on the runners of one of these sledges. We were so amused that we didn’t think to take a photo, by the time we had uncovered the camera from inside all the clothing though she would have been gone anyway.

Back on the ship after a nice walk we only just had time for lunch before the restaurant closed, as it was we had to take our main course into the coffee lounge to finish. The ship sailed on at 14h45, docking again at Kjøllefjord at 17h00 and Mehamn at 19h15.
Before dinner there was an excellent lecture on the Sami, the indigenous nomadic people of Scandinavia. Yet again like America and Australia, stories of persecution and executions for living the life and having beliefs that were different. Tomorrow we will visit a memorial to  them.

The speakers suddenly piped up again that the Northern lights were visible, this time from the rear observation deck as we had turned south west after the North Cape towards Kirkenes our last stop before retracing the course.  So a frantic dash to our` cabin to don all our cold weather gear and up on deck.
Well, the whole of the northern sky was filled with an eerie green misty light, slowly changing shape, getting brighter then darker. It was spellbinding, fascinating and humbling all at the same time. What must primitive people have thought. Occasionally a giant face would appear or on one occasion  the shape of a crocodile was clear.
After about half an hour of being totally spellbound suddenly a shooting star, comet, meteor or whatever shot across the  sky with a trail of sparks behind it. What a bonus. sadly without a tripod and the means to adjust the exposure on the camera none of the photos showed anything because the lights were so dim. Also the ship was pitching so much that any long exposure would have been blurred anyway. We stood there for another half an hour before the lights completely faded then returned to the lounge for coffee and excited chat about our recent experience. It will be great if we get another viewing with more intense colours but if not the purpose of our cruise, to see the Northern Lights has been fulfilled. Another tick on the “Bucket List”

Berlevåg at 22h00 and Båtsfjord at 23h45 were our last two stops today, what a great day. Tomorrow will be an early start as we are going on a Husky sledging adventure.