During the night the ship stopped at Vardø at 03h15 pronounced Varder because the Norwegian Ø is pronounced “er”, then Vadsø at 06h45.

We got up for an early breakfast so as to get all our warm clothes on and be on the dockside as soon as the ship docks at Kirkenes at 09h00 to catch the coach to the husky farm and Snow Hotel. As soon as we arrived we were split into three groups, luckily we were in the first, then issued with enormous arctic cover suits and gloves if we wanted them. There were about eight sledges with eight Huskies each already harnessed to them. All the dogs were barking and howling so excited and just wanting to run. We were directed to the furthest sledge to meet our Musher (driver) Tommy who helped us to get seated, Steve at the back astride the sledge with 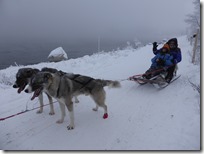 Judy the same between his legs. Eventually when all the others had got themselves settled we were off. The dogs just loved it. Unfortunately there was not much snow and the track we were on was mainly ice and quite bumpy. Wherever there was soft snow the dogs used it as they could run much better in soft snow and it was better for their feet. Unfortunately we didn’t get as long as

promised on the sledge because there were too many people booked in the time available but what we did was a wonderful experience. The dogs were great, even Steve who is not a doggy person at all was stroking and playing with them.  After a hot drink beside a log fire we took a short walk to a 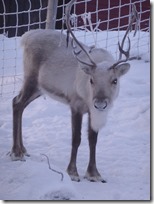 compound with some Reindeer. On the way we passed a snow machine producing a large mound of sow which will eventually be carved into an Ice hotel for Christmas, as with the Husky track there had just not been enough snow yet this year. By the time all three groups had had their go the coach only just made it back by the sailing time at 12h30.
By the time we had lunch, because we were so far North it was already dark. We docked at Vardø at 15h45 then shortly after leaving there was an announcement that the Northern Lights were visible from the rear deck, so a quick sprint to the cabin to get togged up and we watched a fantastic display for about an hour before they faded again and we returned to our cabin for a large whisky and Drambuie to help warm up. We heard later that it was minus twenty two degrees. No wonder we were chilled to the bone.
We had seen the Northern Lights but were so  frustrated that our camera would not behave and take the pictures we are sure it is capable of. While sitting in the lounge later we saw a South African guy looking at fantastic pictures of the lights on his Android phone very similar to Steve’s. so we worked through what settings he was using and that setting is not available on Steve’s phone, grrrr. But he very kindly said he would email them to us so at least we had something to remember, they were the same lights we had seen at the same time after all.
We were now on the return trip from Kirkenes south and there were not as many passengers so we had been moved to an earlier sitting at dinner and a different table. Now we were sharing a table with two Australian ladies who we got on with straight away, they were a laugh a minute.
The main course at dinner was a

beautiful Reindeer steak so Christmas is off this year because we have just eaten Rudolf!! 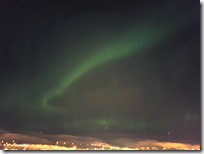 After dinner Judy collected her emails to find that the South African guy, David had trouble sending the pictures and had asked an English lady Linda, to send them to us and she had also sent about twenty of hers as well, such a nice gesture.As you can see, they are quite spectacular. We are really lucky to have experienced it.

The next stop was Vardø where were to walk to the Witch Monument to the persecuted Sami People but the ship encountered a lot of fog from Kirkenes so arrived late so not enough time to walk to the monument which was a shame, but another thing to do when we return in the motorhome.
There were two more brief stops today at Båtsfjord at 19h45 and Berlevåg at 21h45.

There were four more stops during the night Mehamn, Kjøllefjord,Honningsvåg and Havøysund at 07h45 by which time the ship was back on schedule then a two hour stop at Hammerfest at 10h45, we visited the Polar Bear Museum there, which was very interesting and showed the serious effect that modern human life was having on the Polar region and the Polar Bears in particular.   There were three further stops that day at  Øksfjord, Skjervøy and Tromsø.
In the afternoon we had a very interesting talk by the Expedition leader, about the Islands of Spitzbergan & Svalbard which is halfway to the North Pole. She had lived there most of her life and showed us some spectacular pictures. In the evening our Captain, Captain Nilsen gave a talk on navigation in the Norwegian waters. There are literally thousands of islands from large to small with thousands more lumps of rock and other hazards he has to avoid while also keeping the ship to its amazing schedule of stops. The day finished with another hour or so on deck staring at the sky watching the Northern Lights.

The Ship was supposed to stop at seven ports today; Finnsnes, Harstad, Risøyamn, Sortland, Stokmarknes, Svolver and Stamsund but the weather was too bad for it to safely dock at Svolver so the excursion from there was cancelled but a bus was arranged for passengers who were dropped off later at Stansund. A bit annoying for them I should think as it will have made them about five  hours late by the time they get home. But living .here I should think they just take that sort of thing in their stride. There was an hour long stop at Stokmarknes where we could have visited the Coastal Steamer Museum which was basically about the Hurtigruten shipping story but we didn’t think we could do it justice in just an hour, especially as one of the earlier ships had somehow been lifted out of the water and was part of the exhibition. So another thing to do when we come back in the motorhome.

In the evening we had an excellent talk on the history of Hurtigruten which means “fast passage”. Before, in summer a letter from the North of Norway would take five days, but in winter it would take five months. Now with one northerly ship and one southerly ship daily the Norwegians have a daily delivery the same as us.

Tomorrow we again cross the Arctic Circle going south at about 09h15.