We took a walk on to the beautiful sandy beach this morning, Steve dipped his hand into the water, it was freezing. So no swimming today.

We moved on to the Smoo caves at Durness, the main cave and waterfall cave were open but the 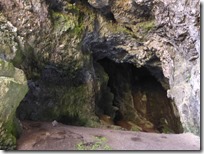 guide didn’t start tours into the other caves which could only be accessed by boat until 10:30 . So instead we walked up 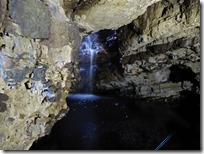 the many steps and out to the headland. The inlet from the sea to the caves was really sheltered, no wonder the Vikings found it to use as a safe haven and to repair their boats.

Driving on from the caves the scenery became more dramatic and we were glad we took others advice to drive the route anti-clockwise, half the drive south from Durness was on single track which was not a problem at all as the road was fairly wide and there were many passing places. The glimpses we got of the bays along the route were amazing golden sands which would not be out of place in a Mediteranian setting, except for the temperature, we even had a glorious sunny day. Just after Kylesku the route turned off right (west) to loop round to Lochinver. Narrow single track with many twisty bends and steep hairpins. At one point we met a long “A” class motor home followed by a smaller “C” class, a very tight passing. When we reached the top of the hill where we had first spotted them there was loads of room, if they had hooted to beckon us to come on! anyway the route was challenging but completely doable in a wide “A” class like ours and great fun to drive.

While reading various travel books Judy had marked Achmelvich as having the highest water falls so when we saw the turning off to the right we took it, a sign said “Not suitable for Caravans or Coaches” so we thought it should be ok for us. She must have marked the wrong place because there were no water falls but there was the most glorious beach yet, with not golden sands but pure white silver sand so fine it was almost dust. The road was a dead end with just the beach, a youth hostel and a camp site. On our way out we ran in to the school bus, quite a big vehicle to be using the road, he reversed back a bit and we were able to just get past.

We didn’t stop at Lochinver but were told later that it has a fantastic pie shop, we were heading for a car park near Inchnadamph where we hoped we could park for the night so as to walk up to the “Bone Caves”, ice age caves where they had found Polar Bear remains and evidence of Stone Age occupation. The car park was there level and no “No Overnight Parking” signs so we settled down for the night.

Some guys came walking down the path to a Transit van in the car park and Judy got chatting and it turned out they were Archeologists searching for new caves. 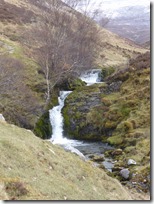 11:30 when the sun came out so we decided to try the hike up to the 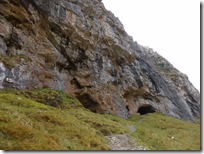 caves. But as a precaution we phoned our son Nik to tell him we were heading up to the caves and would phone again when we returned. We felt quite safe as a Mountain Rescue van had parked about an hour earlier and three people had set off walking without gear so probably a social walk rather than a rescue. The 3km hike to the caves was a bit challenging as we had not been walking for some months but worth it to see the caves. Just a look with our high power torch though, because a full explore would have needed a boiler suit, possibly ropes and quite a bit of crawling through small spaces.

Back at the van and preparing to leave and the Transit appeared again with the Archeologists so we had a good chat with them about the caves.

We headed off south towards Ullapool where we hoped to fill up with LPG and if possible some water as we thought we must be getting low but the tank gauge had stopped working yesterday.

Unfortunately the MOT station with an LPG pump was closed but we filled up with fuel farther along the road but could not get to use their tap as it was next to the car wash which was in use.

The road from Ullapool to Gairloch was pretty but a lot of forest with the occasional glimpse of another fantastic beach. Our wild camping database was showing lots of roadside places to 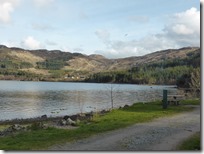 overnight but we suddenly spotted an off road picnic spot so pulled off and found it went way off road to the shore of Loch Maree where there was good flat parking with a few motor homes and tents already there. There were also very clean toilets with mains water so we could get some to tide us over. 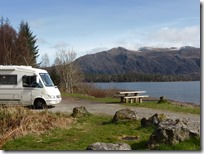 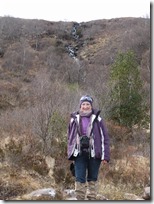 TV, filled up with a bit more water then had a really nice challenging hike along the lake shore for three hours then a few chores in the van before continuing our trip tomorrow.