Christmas Eve evening was spent with the Dutch at the site next door where Chris & Fred were staying, mountains of food but no entertainment at all which was a bit of a disappointment. Then Christmas Lunch was at the “Rovers Return” in Bernidorm with the Funsters from the MotorhomeFun.co.uk group to which we belong. We had a very good meal traditional Christmas dinner with crackers and paper hats then a long walk along the Prom in the warm sunshine.

Everything we could find was booked up for New Years Eve so we all decided to walk into town where they had set up a sound stage and see the New Year in with the Spanish which was great fun and we were drinking bubbly and eating nibbles and bopping on the beach till about 2am.

Benidorm is a great place with an abundance of very cheap eating places and Chinese nick-nack shops where you can buy almost anything. We usually stock up on cheap everyday watches and Judy even managed this year to get an eye test and new glasses at the Benidorm branch of Specsavers! But seventeen days was enough and we were ready to move off a day earlier than we had booked. But had another great meal with the Funsters dining club the day before we left. Which topped of our time there.nicely.

We also had met up with friends Ann & Colin and Tammy & Bob all who lived near us in the South of France and were wintering in Benidorm.

On the 4th January we moved 90 km south to a Camper Stop at la Marina near Guadamar hoping to watch the “Three Kings” parade which is on Twelfth Night but we had a ride there on our bikes during the day and decided it was too dangerous to ride there along the main road in the dark to see the parade. We are seriously thinking now of swapping our bikes for a small motor scooter which will enable us to explore a little further afield than walking or on our small folding bikes allows.

On the way back from our ride we stopped at a supermarket and bumped in to Darren & Lyn, “Dazlin” from the Funsters club who we had met in Morocco three years ago when they had just started “Fulltiming” in their motorhome. After about half an hour chatting in the car park we decided to meet for coffee the next day so in the morning we checked out of the Camper Stop and dove to their Dad’s holiday home where they were staying just a mile up the road.
Well, cofee became lunch then afternoon tea and we left them at gone five too late to find anywhere so just parked in the street for the night which was fine and we woke to the market setting up on the street just outside next morning.

Saturday 7th January 2017 – After a couple of hours walking round the market with Judy buying a couple of Jumpers for a Euro each and a big bag of olives we set off for Benijofar about 30km away where we had been told about a fantastic Fish & Chip restaurant that we must try. Yes it was a fantastic lunch which required an hours walk round the town before we could comfortably drive on.
We didn’t have far to drive, just about 15 km to a wild camping spot that Anne & Colin had texted us about at la Mata. It was nice, a flat grass area outside a Cemetery so no noisy neighbours! in a country park with a beautiful lake and walks all around. N 38.01912, W 0.66491. We took a walk in to la Mata where we had stayed last year, because a lady we met in Benidorm Market had said it had been devastated by storms, but the part where we had stayed was fine except most of it had been built on, so we were glad we were at the country park. We had hoped to meet up with some Painting friends of Judy just along the road at Torrevieja but received a text to say that they had other commitments.

Sunday 8th January 2017 – We drove a bit further today to a beach near Aguilas where friends had said they had spent a few nice days, that was a 204km drive. It was a nice place and we stayed a couple of nights but have since heard that the Police had cleared all the Campers off the three parking places by the beach there. Such a shame that some people stay so long and outstay their welcome spoiling it for the majority.   N 37.38001, W 1.62688.

Tuesday 10th January 2017 – we left early as we had another long drive ahead but the forecast was overcast so a good day to drive. We arrived at the Camper Stop at Mijas near Fuengirola after 368 km. this is just the car park of a Resturant attached to a riding stables but the owner allows Motorhomes for five euros a night and provides water and dumping facilities. – N 36.53232, W 4.63888. The main advantage is that it is walking distance from an Iceland Supermarket for good back bacon and English Tea and cheese and a large Lidl for other supplies but also a huge shopping mall with all the top clothes shops and January is Sale Time with massive reductions. So we were buying our years supply of tee shirts etc. at just two euros  each along with many other bargains.

Thursday 12th January 2017 – Another long drove this time to arrive in Portugal where we are heading this year. Exactly 400 km took us to a beach near Castro Marim just inside Portugal. We had downloaded a database of stopping places from some Motorhome Bloggers the Bumbles which we could use on our Autoroute mapping system and 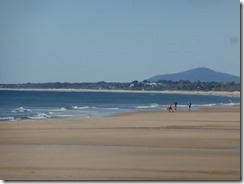 this was one of the first ones in Portugal and very nice it is too. Three large parking areas near the beach with about fifty campers.
We are told that the police patrol regularly and as long as all gear is stowed in the vans at night and they do not see washing hanging out they are happy and everybody is respecting that. Mainly Dutch & German some of whom come every year and have been here since October. There are no facilities but that is fine for us to just stop and relax in the sun.for a few days. We have walked into the little town a couple of times and Judy now has to buy some more sun cream because she is getting a bit low with all the sunbathing she has been doing. Steve has had to work on the Satellite system a bit because we are getting near the edge of the footprint but managed it so can now connect and send this instalment of our blog.
We are not real bloggers though so this is just a diary of our trips that we share with those interested in our travels and for us to have a simple permanent record. Till next time which will probable be in about a week, hope the cold and snow in the UK is not too bad for you all or France does not have too much rain.
Some of our comments above may make you wonder why we are staying in the p[laces we do. We hate sites, parked just a few feet from the next camper within fences without views. The beaches and parking spots we stay in are large and with plenty of space between us. Most of the time we do not need facilities we can go four or five days before we need to empty our waste or fill with water. Sometimes we will pay for a site or a special Air de Camping Car which has the services we need occasionally and for this we expect to pay and are happy to do so. What we look for really is quiet spots in the mountains or by the sea where we can park up spend the day walking or just admiring the views.  The beach we are at at the moment, the campers are parked well away from each other and the space for locals to park near the beach has been left clear so as not to spoil their enjoyment. Space perhaps for a hundred cars but perhaps only about five a day visit at weekends. In the season of course the campers will not be here.
Till next time.