Thursday 26th January, we sadly left our lovely parking spot quite early  because the forecast predicted rain mid morning and we may have struggled to drive up the steep slope out if it was wet. 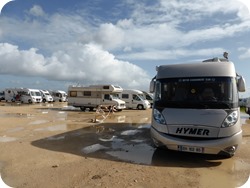 headed there arriving at 09:30 we parked just behind them then the heavens opened and it continued raining all day and all night apart from a brief spell when we all decided to walk round the town, but we inevitably got wet when it started again after about half an hour. Unfortunately the quick fix to the leaking fanlight had not worked and we found another small drip.So Steve will have to get up on the roof again with his sealant gun when it all dries out.
We were really glad we had left the previous parking place because I think we would have been stuck there for a few days while the steep mud road dried out.

Our son had emailed an image of “Flat Stanley” which was a school project for our grandson Finlay. We are supposed to take photos of us with “Flat Stanley” at landmarks as we find them so “Flat Stanley” could travel the world. We had passed a photo shop the previous day while walking in the rain so we took the image file on a memory stick to get it printed out before heading off to our next stop which was “The End of the World” 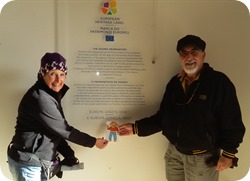 called the End of the World. It is the furthest point south and west of the European mainland and in the time of Christopher Columbus it was thought that to sail south or west from this point would be certain death as, because the world was flat you would inevitably fall off the edge. That is until Columbus took a chance and ended up discovering America. (Please correct us if our history is wrong!) 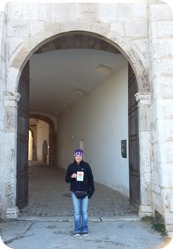 Like Lands End in the UK, Sagres was a very windy place but after a spot of lunch we braved the wind and walked to the fort at the end. Unfortunately because of the weather the fort was closed for safety but the lady at the pay booth took a picture of us with Stanley against the sign which unfortunately says Europe starts here rather than this is the end of the world.
This Judy at the entrance to the fort again holding Stanley absolutely freezing in the biting wind. 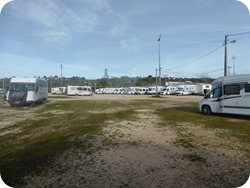 made it a very rocky night and we would not have been able to put the Satellite Dish up to get the internet so we headed back to Lagos where we had seen a very large area with motorhomes on it next to the Sports Stadium. It had space for about ten motorhomes with electric if they wanted it but a huge area outside which could have lost about a hundred.
Steve did a scan before putting the dish up and found that there was free open Wi-Fi as well which was very fast. The cost was €3 which a nice man collected in the morning. The only disadvantage is that it is on the outskirts of Lagos so a bit far to walk, but another year when we have sorted out a scooter and it will be a great place to stop for exploring Lagos.

Sean who Steve had been chatting to at Manta Rota Aire emailed to say he had received a supply of special Satellite Boxes which would enable us to get a few more channels than just Sky News while travelling in Europe so we headed back there to pick one up. Unfortunately after taking the system apart Steve found he didn’t have the the right cable with him to connect it up as the one that came with it had the wrong plugs for our system.
The following morning Chris & Fred turned up and found a space next to us. Over a cup of coffee we explained what Steve was doing and the lack of the correct cable so Fred offered to take Steve into the next town on his motor scooter, it was about twelve miles away and had a large shopping mall. Unfortunately every cable except the one we wanted was in stock but another pointer to the need for the extra mobility of a scooter.
That afternoon Steve was able to get on the roof in the sun and put a bit more sealant round the roof light, let’s hope.
Fred did a barbecue that evening then they came into our van and introduced us to a new card game, which was great fun.

The next morning Chris knocked to say that Fred was very poorly, not the wine the previous evening, but it appears that he had been bitten by an insect, a sand fly perhaps as we were next to the beach, but it affects him quite badly. We decide we would all stay put till he was better just in case she needed any help.
Tuesday 31st January Fred was well enough to drive but still not right so we moved to Vila Real which was a much bigger town with more facilities but the Aire there had a couple of spaces but they were too muddy from all the rain so we drove back to a wild camping spot we had stayed on a couple of weeks back.

Wednesday 1st February Fred was much better this morning and they had decided to drive into Spain towards Seville but we wanted to go inland to Alcoutim which we had read was very nice so we said our farewells to probably meet up again along the way.